The use of anencephalic infants as an organ source has been a hot button issue for years. Anencephaly is defined as “a central nervous system abnormality that is characterized by congenial absence of the forebrain, skull and scalp”. Infants with anencephaly do not typically live more than a few days. Death is certain in their case. Anencephaly can be determined as early as 12 weeks into the pregnancy at which point parents have the option of whether to abort the fetus or continue the pregnancy.

Many parents opt for abortion, while others opt to carry the fetus to full term in hopes of providing organs for babies who need them. There is an increasing shortage of transplant organs for infants and anencephalic babies have become a source to meet the needs of this shortage. In most cases, brain death must occur in order for organ donation to occur. However, this policy creates problems in the case of the anencephalic infant. How does a physician call time of death when the infant has a functioning brainstem and can essentially eat, sleep and cry? Is it morally and ethically sound to remove organs from these patients while they are still alive?

If we consider a utilitarian approach, then the answer is yes. The classical utilitarian approach has the aim to maximize the common utility of the beings who can enjoy happiness and who can suffer and to minimize the total harm. Here, one could argue that providing organs to babies in need is a great achievement that will benefit a great number of children. Anencephalic babies are a very small part of the population and it is certain that they will die shortly after birth. 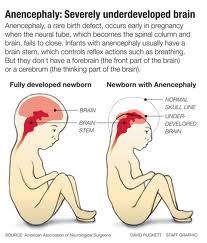 On the other hand, there are those who believe that using anencephalic babies as an organ source is immoral and unethical. These views are often times rooted in the Kantian view that humans should not be used as means to an end and that people need to be respected. But are anencephalic infants people? Biologically the answer is yes. Anencephalic infants have the same genetic make up as any other human being. However, modern philosophy characterizes personhood by the functionality of an individual. Kant states that only a person needs to be respected, and a person is someone who possesses rational agents.

According to this analysis, it appears as if the anencephalic infant is not considered a person. If this is true, then why is there still a debate as to whether or not it is ethical to take organs from a living anencephalic patient? I believe this is because society is at odds as to whether an anencephalic infant is a person. It is hard to conceptualize the fact that an infant born alive with a functioning brain stem is not considered a human being. How can one say that a baby who looks like a baby, cries like a baby, sleeps like a baby is not a person?

If the deciding factor of whether a person is in fact a person rests on whether they possess rational agents, what are we to say about the mentally disabled, Alzheimer patients, persons with dementia and those who are in a coma? Are they no longer considered people because they have lost their ability to reason? I am not sure if we can truly come to a conclusion on this matter, however I do believe that one’s “worth” should not be determined objectively but subjectively. Making determinations on when a person is and ceases to be a person can create a slippery slope, one that can have serious ramifications on society.

10 thoughts on “The Anencephalic Infant; Are They People Too?”